One of the glorious things about living in the American South is the constant profusion of green and growing things. For most of the U.S., January begins a dreary time with few respites from the daily work and life tasks. For those of us in New Orleans, it begins the most fruitful and joyous season of the year.

I’ve written about the joyous part in these pages previously so I’ll send you there to learn about our Carnival, but here is an excerpt from one post that links markets to Carnival:

The farmers markets have the same joyous Carnival attitude all winter here. Productivity does that. Satisfaction and anticipation can be seen in the faces of those behind their tables, with actual oohs and aahs from those in front spying those deep red Ponchatoula strawberries, or from a senior walking to their car dwarfed by a bag of greens. Very similar to those presenting carnival tableaux from atop a float or those catching “throws” from below. Having a sunny mild winter at the same time as a beautiful and convivial public celebration that lasts for weeks always strikes me as the best of luck that landed at my feet.
And it also reminds me how the work we do in farmers markets IS joyous and as good of a measure of the civic health of our places as public events like Carnival.

I want to talk about the fruitful part in this. One activity I am lucky to participate in here is to help harvest a 50-year old calamondin (calamansi) tree that sits in the garden of a historic house museum. I called them up some years back after noticing much of the fruit remained on it, and they gratefully invited me to harvest when I wanted.  This is one of more than a few of this type of activity that my friends and neighbors in the city will invite me to participate in, but it is my favorite because it is in my neighborhood and because it is the first one that I do each year.

So around this time of year if you happen to be in the Quarter, you might notice a little group (or sometime just me) at Chartres and Ursulines with ladder, tools, and bags. We chat animatedly with each other and with passers-by. Everyone asks what the fruit is; locals assume it is a kumquat (we have a ton of those around town), but usually only people who have lived in the Philippines know the calamondin. It is a gorgeous fruit, slightly larger than a kumquat and sour in juice, but the skin is sweet. Because the skin is easily torn, it requires cutting it from the tree. When you get back home, more careful cutting happens.  Once you have separated the greenery from the fruit, it’s time to wash it, and then begin to peel and then to slice the skins into ribbons. Once that is done, the marmalade is made. Most of you know the many steps and decisions that come in that process so I’ll spare you the rest. Or maybe the fruit will be used  to make some sort of tonic or maybe to enhance the seafood that comes from the local farmers market. 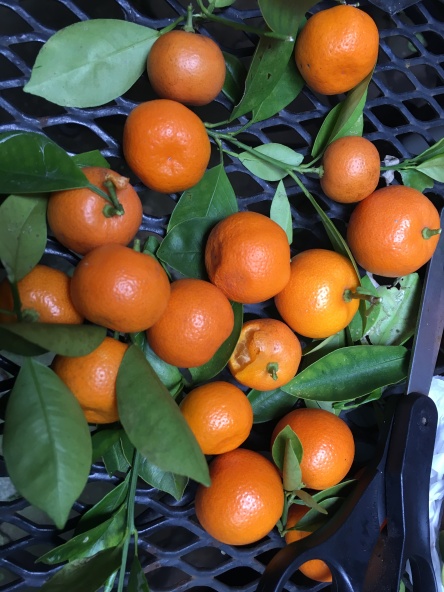 Each of these steps means musing time, time to think about a problem or an upcoming task. For me, as it always coincides with the start of my market and farmer conference season,  I am usually preparing for at least three, but maybe two or three times that number of workshops or keynotes. The mild weather, the lovely tree offering its bounty next to this graceful historic building, friends assisting,  the decision on which recipe to use, the careful preparation of the jars, the buzz around me due to the season of frivolity, result in a very pleasant time thinking through what I want to say at these conferences.

This year, maybe because of the recent polar vortex up north and the government shutdown, I want to make sure these audiences feel that hope and joy that I absorb from these activities. (I am sure it also has to do with the recent passing of a great leader and friend.) I was thinking about that as I snipped away this week, and was also thinking how the big projects in organizing around food should be as planned and intentional as those long-ago gardeners who set that tree precisely in the southwestern corner of that plot, with its main truck protected behind a 2-foot thick wall, with that 2-story building directly behind it to support it during wind events.  And that even though it was planted behind those walls, it was meant to be a visible demonstration of food and life in the neighborhood and meant to drop its fruit on the sidewalk side to those who have always participated in the art of gleaning.

It’s also important to remember that the harvesting and preparing of the fruit from that long-ago planning allows me the time and inspiration to purchase more of the greens and root vegetables that were planted by market farmers only a matter of weeks ago. And that type of short-term strategic thinking and intuitive work is as important as the long-term big projects that we do as organizers.

When I am picking or purchasing food from those who grow it at any time of the year I often remember that all of those plantings were based on the hope from the planner that someone (whether animal or earth) would use the harvest. Additionally for tree planters, they also have to hope that there will be future gardeners to care for the tree. Interestingly, this garden was a 20th c replanting of an earlier 18th c garden that had been torn down to build a macaroni factory during the time when our Sicilian immigrants were using the old houses in this area (known then as “Little Palermo”) for homes and for food production. The beloved author Frances Parkinson Keyes purchased the house in the 1940s and made it her home until her death in the 1970s. Under her care, the garden was rebuilt, using the extraordinary 19th c plan book city archives still maintained at the New Orleans Notarial Archives. (I wrote about those archives in a review I did on a book on these gardens and on civic spaces.)

So even in these troubled, wintry beginning days of the 19th year of the 3rd millennium and the beginning of the 19th year of the 21st century, I cannot forget or allow my fellow market organizers to forget that we all harvest food and community from others’ hopes and their careful planning some of it only weeks before and others from the time of the long gone. I get to experience that old tree up in its branches and to share the bright orange smell, taste, and sight of those calamondins in that old garden, which reminds me that this work is not always meant to offer fruit this year or even the next. And that it should be personally nourishing, and bring joy and camaraderie.

The link to support this old house and its garden if you are so inspired.

View from the tree looking at the old Ursuline Convent

Pals of mine harvesting this year. V is holding on to her eager harvesting husband.

Recent work (2011-2019) while working as an Independent Researcher and Analyst (as of November 2019, took on role as FMC’s Training and Technical Assistance Director)