A story that I wrote about Cleveland’s attempt to consider its post-industrial future on the Wallace Center’s Food System Leadership Network* site. The main point to consider is how farmers market leaders choose to interact with municipalities working on green solutions. If DTC organizers are not at the table, how will their needs be known?

*I strongly recommend that anyone involved in food system work joins the FSLN site.

As many of my readers know, I spent my early years in the west suburbs of Cleveland. Like many of us, I occasionally trucked over to the West Side Market to buy special items or to soak up the atmosphere-actually, maybe the right word is rarely.

Luckily for me, I moved to the nearby Tremont neighborhood while a poor community organizer in the 1980s and 1990s and had more access to the market. My friends and I used the market quite regularly, as without it gas stations and a very dirty grocery store many dangerous blocks from us were our available shopping outlets. As we became regulars, many of the WSM vendors shared their end of day produce with us at a lower price or even threw in some items with our purchase. Later on, my nephew worked there while a teenager with a pal of my sister’s and since he had to be at work in the pre-dawn hours on the weekends moving meat up and down the stairs, now knows what hard work looks and feels like.

So for those reasons I keep up on the news from this market so closely and why changes to it remain deeply personal to me. The changes that are being made, like paid parking and more days open, sound like they are to support the nearby businesses around the market more than those within the market- not that there is anything inherently wrong with that, just that it seems like the city is mostly responding to external pressures. I will say however, that for a public market to be closed on Sundays has always surprised me. I’d have preferred to see Mondays and Tuesdays as their dark days.

Achieving balance between the needs of the neighborhood and of the vendors and shoppers is the most important task and, as any market organizer knows, is a delicate dance. Some of the comments in these articles from the vendors are implying a purely political reason for this change, others are willing to believe this is a good marketing idea in a constantly changing retail environment while still others are intractable in not changing the tradition of Sunday hours and even believe that it will only dilute Saturdays sales. (That may very well be a valid point that I will of course answer with they should be collecting data on their shoppers to know and be able to answer that question.) Shoppers’ opinions tend to line up on more days are better, which is certainly understandable. The parking woes that exist currently for shoppers are likely a large reason for people staying away and so more days open may solve that issue temporarily, but probably not permanently.

I think what is missing in the announcements is the clear plan for this market and for these vendors by the management and advisors. Is the WSM becoming part of the cafe/entertainment culture that has grown up around it and therefore expected to primarily serve it? Or is the WSM part of the robust local food culture in Cleveland and meant to align itself with those values? Or do the operators see the WSM as an anchor for small business in and of itself?

As a traditional shed market, a primary purpose must be defined and acted upon in their decision-making process because unlike pop up (open-air) markets, it cannot move and/or redefine itself easily. It must constantly draw people to its bulk through changing times and offer enough regular return to those permanent stall vendors who have also invested in shared infrastructure.

How this change was handled in Cincinnati at the Findlay Market  a few years back seemed unfortunate and led to a very public argument that meant the market had some bad vibes around it for a little while, but indications show that the changes there may have helped their growth. However, it is important to recognize that the entire area around Findlay is seeing increased vibrancy with millennials and urbanists repopulating  OTR and downtown and so this success may have little to do with its added hours. I do think the management and supporters did some great work supporting that expansion.

Certainly, there it is difficult or even impossible to achieve full agreement for almost any decision made by a market organization, but collecting data and using it to redefine the market’s mission and understand its context historically, now and for the future will help make the right decision clearer.

And yes, I’ll shop on Sundays rather than Saturdays whenever I am back in Cleveland to leave my Saturdays for the direct marketing farmers markets around town.

One of the activities that the group has done at the Sustainability Conference in Cleveland is to tell the story of both personal and municipal transformation through moments lived and remembered. This is the earliest time period (1969-1989) on the personal transformation wall. This is another idea that food organizers may want to use when working with communities. How wonderful to ask them to think about how and and when healthy regional food became important to them. 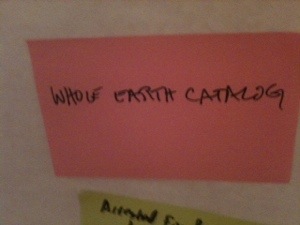 Here at the Cleveland Sustainability Summit looking through their “Sustainability Dashboard”:
Local Food Accomplishments for 2013 include:

Growhio planning a follow up summit in February of 2014 to identify critical gaps in the local food economy
Menu For The Future grants and courses have supported canning workshops and offered funding for activities at City Rising Farms in Hough.
Community Kitchen Incubator Forum held to celebrate the launch of many incubator and certified kitchens in the area.