I wrote a post on FMC’s website about my duties while attending Slow Food Nations in July, so I thought for my own blog I’d write something about a few of the people who I hung out with or heard speak, in the hope that it might offer some different context.

As for the event itself, it was definitely more focused than the previous year, with fewer locations and maybe even fewer listed events which was pleasant logistically. However in doing so, lost its pairing with the Union Station Farmers Market, which was too bad, as having the opportunity to see the actual transactions of a larger food system is rewarding for any good conference. Related to that, I’d like to see SFNations figure out a way (and they would like to as well, I am sure) to include more market leaders and small family farmers into the agenda, although the time of year is not the best for those folks to leave home. And I hope for the day when funders and partners offer support to market managers and interested farmers to attend more events like this one. It ain’t all about market day skills after all.

Those that were there were able to commune with those doing similar work around the world and to see and taste some regional products from across the U.S. in the SF Marketplace. I try to get through the Marketplace a few times during SFN because the businesses that SFUSA brings together are always impressive and great at explaining their approach and products. I’d like to have more direct marketing farmers in the US be able to see how well these businesses work as well when educating as when selling.

Sofia Unanue from La Marana. During the Disaster Strikes panel, Sofia offered a powerful, real-time reality check on recovery, beginning with her sobering and yet uplifting video:

I imagined I felt her stress level and exhaustion even as she stood there calmly and pleasantly in Denver in front of a group of people who care deeply but cannot truly know what she and her community are going through over what is being lost with every passing day in the absence of a well-organized and empathetic public and philanthropic aid process. Not even those of us who have been through our own version truly know her reality, but what I do know is that recovery depends on people exactly like her being there and coming to these events to share that reality. And that her video made Richard McCarthy and I standing in the back of this room both weep and as we did, we knew we were remembering New Orleans 2005.
-Most importantly, don’t forget Puerto Rico.

Brian Coppom, Boulder County Farmers Market CEO. I first met Brian at last year’s Slow Food Nations event as I was tasked to help SFUSA with events that were scheduled at BCFM’s Union Station Farmers Market. As helpful as he was, the best thing he did was to give me access to his lead staffer, Elyse Wood, who can make good decisions lightning fast about the market space and in doing so, smoothed the events out so that featured speakers like author Deborah Madison and legendary MS farmer Ben Burkett were primed to lead lively and informative talks. If I would say that to Elyse, she’d likely shrug and smile, because in her list of things to do, it had been a simple task. I know because that’s how I would have reacted while doing very similar work in New Orleans for a guy very much like Brian (see last profile). But it isn’t so easy and the knowledge accrued by market organizers managing multiple sites, staff, programming, a network of colleagues and so on is impressive and yet few funders support this part of food work with professional development opportunities and other rewards. And I know that market directors like Brian (and Michael below) feel the same way.
Brian has quickly become a good pal and a strong voice in my list of go-to people when I search for input. He is a board member of FMC so even though he is constantly working on food and farming in Colorado, his goals are at a national level in intention and in impact. Look for those people in your travels and keep them on your speed dial.

-Most importantly, he is hilarious and comfortable at a mic talking markets and in wearing hats: 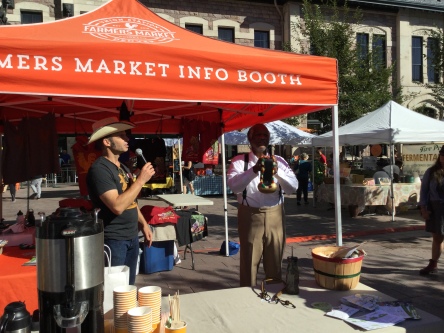 Raj Patel. Well I do not share a long or rich history with Raj, but I appreciated his thoughts during this SFN so much I wanted to include him. Of course, his writing has always been illuminating as he takes on the dominant thinking around “value” which, of course, actually devalues everything worth saving. He’s included in this list for the moment he took a general question about local and elevated it to the question of justice:

“Almost all of the food that is grown and eaten in the United States today, that is bought and paid for, involves the hands of people of color…What’s important about local is you also need a robust sense of history…

-Most importantly:
You don’t fix the past with a certain type of tokenism; you fix it with a reckoning. And that reckoning is something the food movement has yet to have.”

Richard McCarthy, Slow Food USA Executive Director. It’s probably no surprise that I include Richard, as he is my former boss as well as my friend. Going through building and rebuilding farmers markets, disaster recovery, staff hires and fires, funding gaps and much more as his Deputy Director for almost a decade gave me as solid of a start in my national work as I could have wished for. Even so, I added him to this list on the strength of his enthusiasm for front line organizers and his skill in exploring how the people who are around him at an event can be connected. He throws a helluva event because he is obsessed with maximizing the results for the attendees by packing in as many informative and appealing touches as possible. It was the same back when he was the market director.
-Most importantly, I think Richard weaves a story around food and farming that is practical and aspirational to even those yet unfamiliar with what we do. Here is a podcast that I happened across that I think is a great example of that.

Poppy Tooker, Writer, host of public radio show Louisiana Eats. Like Richard, my relationship to Poppy is long and so full of amazing and sweet stories. Suffice it to say, Poppy has taught me how to share the stories of food producers with the larger world. During this SFN, I walked out to the festival area and heard my old pal’s mic’d voice doing a cooking demonstration and since her educational, wickedly funny, and precise demos are the stuff of legend in New Orleans, I immediately made a beeline in that direction. I got there just as she was wrapping up but did snag the last bean calas that she was offering. I shared it with the California couple next to me, explaining what this was and its importance to New Orleanians because that is exactly what she’d expect me to do.
Her panel introduction for the disaster panel was extraordinary. I say that as someone who stood in the back of the room and watched every chair’s occupant lean forward and the quiet descend on the room as she spoke with humor and pathos about the trivial and tragic memories Gulf Coasters carry from 2005.

-Most importantly, really truly because of Poppy (and Slow Food) we rebuilt our farmers market in two months in 2005 and saved a lot of farms and family businesses. And learned that we have others to call in across the globe in these times. 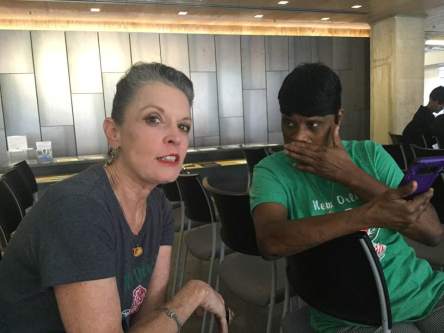 Poppy and Miss Linda (the Yaka Mein queen of New Orleans) talking at SFN about love and loss. New Orleanians can always veer from the chatty to the profound in a blink of an eye. This story Poppy was telling (as Miss Linda and I sat rapt) involved a vengeful, murderous jaguar and poor alpacas at our local zoo and then segued into a lovely story about husbands and high school sweethearts. A typical wide-ranging Poppy story with a message.

Michael Hurwitz, Greenmarket Director. As Michael tells people whenever we both show up somewhere, he and I met when he is was just two months into his job, 11 years ago. That time was at Kellogg’s Food and Society meeting and we both spent much of the down time discussing (debating) the functions and potential of markets. Even then, he had a solid grasp of the potential for greater impact and the possible pitfalls of operating what are the most well-known markets in the most competitive retail area in the U.S. That conversation has continued since. Through talking with him, I am reminded what a flagship organization can do, especially if the director trusts in his excellent staff and his vendors. What may not be evident is that the success of Greenmarket’s sites don’t happen automatically – like every other market organization, it requires constant calibration and some luck and Michael is so very honest about those facts when asked to share his lessons learned.

-Most importantly, he asks great questions of everyone, constantly learning more about the field he is in.

Michael and Richard meeting up at SFN